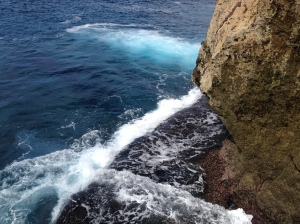 They say you can never step into the same river twice. You can’t look at the same ocean twice, either. Every moment is a million different oceans with different blues, different facets, and different waves, like violent lace crowning the shore.

I was floating in one of those liquid moments the other day, thinking about plans for leaving Guam and all the headache-inducing minutia that goes along with the process, when a sobering thought hit me: the thing I’ll miss the most isn’t necessarily the beach or that moment-by-moment ocean that I can see from my backyard.

I’ll miss the pictures, drawn with both cameras and words, that I wish I could step back into. But I’ll never really remember how beautiful and alive moments are–how floating in these Pacific waters feels like swimming in a diamond, or how the blue of the deep water is so blue that it almost hurts your eyes. Too perfect a color. I bet that’s a taste of what heaven will look like.

The sad part is that as soon as I step out of that ocean and walk away from that moment, I can’t remember how nearly perfect it was. I suppose Massachusetts will have to replace those moments with a few of its own.

She was due today.

One of the things I hate about having a personal blog (or any social media) is having to share moments like these. Part of me wants to skip over it, but that seems crass. I don’t want to give readers the impression that my baby’s birth didn’t affect me profoundly, or that I’m exactly the same person I was before. I’d like to go on from the present as though everyone already knows the context.

But pretending won’t work here. I also can’t bring myself retell my story by writing a separate post. That might have worked a couple of weeks ago, but now I’ve healed enough that I don’t really want to open that wound again. So I’m just transcribing a few excerpts from my handwritten journal. It’s personal, unpolished, sad, and it doesn’t begin to capture what all happened, so if you aren’t up for that, feel free to skip this post and come back in a few days when I have something a little less tearful to say.

She had a full head of dark brown hair. The most perfect little nose. Some newborns aren’t as cute as others, but this one was beautiful.

It was just over three weeks until my due date. On Saturday evening, right before we went to the airport to pick up our holiday guests, I realized I hadn’t felt the baby kick in hours. So I drank a big glass of ice water, poked my belly a few times, and waited. Nothing. Still no movement after dinner that night.

Jess, the friend who’d be staying with us for the next week and a half, grinned as she looked at me and my huge pregnant belly.

I hesitated. “Yes, it usually does.”

Manny and I talked about going to the hospital, but it was late and I told him I was probably just being paranoid. We decided to wait until the next day. Surely I would have felt those familiar wiggles and punches by then.

I slept restlessly that night–lots of incoherent dreams. I remember dreaming that there was an earthquake, and everything felt like that–shaky and uncontrollable on a bigger-than-life scale. I woke up over and over again to struggle to get comfortable, hands on my belly, waiting for the baby to move.

We drove to the hospital rather than church the next morning, still sure we were being paranoid but not so sure that we didn’t want to hear our baby’s heartbeat and have someone assure us that everything was okay.

It wasn’t okay. I knew as soon as the nurse put the doppler on my belly near the baby’s back and all we heard was static.

That was the longest day, but somehow the hours passed quickly. They induced labor. The doctor broke my water at 1 a.m. In a normal labor, I thought, I would have told them no. Do not strip my membranes. Do not break my water.

I wanted to tell the doctor to stop, to let things progress normally and unhurriedly. But now my baby’s life wasn’t at stake, and I wanted it to end so I could go home.

After they broke my water, contractions sped up drastically, the pain set up shop in my lower back, and I stopped handling life well. I got in the shower, told Manny to leave me alone, let water as hot as I could stand it course down my back, and resisted the urge to beat on the walls with my fists.

So this is back labor. I wonder if the baby is posterior.

This is worse than that abscessed tooth I had two years ago.

So this is my punishment for looking down my nose at women who choose epidurals without even trying.

If I could have managed a grim laugh, I would have.

In some ways, the pain seemed appropriate. Not because I seriously thought I was being punished for anything. It seemed appropriate that my baby’s death, which I hadn’t even been aware of until that morning, shouldn’t be an easy thing.

I remember talking to myself and praying in the shower.

Oh, God, please help me. I know you are in control. My world is shaking. Please help.

I remember staggering out of the shower during one of the too-short moments between contractions and telling Manny I wanted an epidural. I had told him a few hours before not to let me get one if I asked for it. He convinced me to try other painkillers first.

I remember holding on to him, clenching the quilt he’d brought from home, hearing him ask me to trust him, digging my fingernails into his back, crying as I realized that every movement and every breath seemed to make the pain worse. And I remember asking for narcotics and then feeling dizzy, almost catatonic in between contractions, and thinking that the meds were doing absolutely nothing for the pain.

Apparently about four hours passed like this–me almost in a trance, alternately demanding counter-pressure, then telling Manny not to touch me, then apologizing for snapping at everyone, and then falling asleep for a few seconds, not knowing who I was talking to and not really caring what they said.

She came out in just four or five pushes. A nurse put her on my chest immediately, and I’ll never forget how that felt. She was warm, and slippery, and limp, and beautiful. All that hair. I cried from relief–the pain stopped immediately–and I cried because suddenly having a child of my own had become real–and I cried because she was so very, very still.

I ran my finger down her nose and couldn’t believe how soft her skin was. I put my hand on her head and all the heartbreak and pain melted into numbness–or just exhaustion and drowsiness from the meds.

The nurses cleaned her up, weighed her, measured her, swaddled and dressed her, and brought her back in–5 pounds, 10 ounces, a too-still newborn. Manny held her, too. I asked them to leave her in the bassinet beside the bed, though my mind told me it didn’t make any sense to do so, and I slept. I didn’t care about a shower. I didn’t care that I was mostly undressed. I didn’t care that the nurses were trying to get four more vials of blood from my arm. All I wanted in the world was to rest.

Before I fell asleep, I heard Manny tell one of the nurses our daughter’s name: Miriam Grace. We had discussed both names, but neither seemed appropriate before; I especially hadn’t liked the name “Miriam” because it meant “bitterness.”

A couple of hours later, I woke up, climbed out of the hospital bed, dressed myself a bit more, and crawled onto the fold-out bed beside Manny.

“The niño is gone,” he said, lying his hand on my empty belly. I snuggled close to him.

“You chose a good name.”

There were more tears. We slept together on the uncomfortable hospital sofa bed, wrapped in surreal peace and pain.

It hadn’t seemed real to be pregnant, even at 36 weeks. It didn’t seem real to be in labor, or to hold my dead daughter afterward. When we came home later that day, I just felt empty, both belly and arms. We slept for hours. When I woke up, I could still see Miriam’s face, could still feel her slippery, wet body on mine.

I can’t believe she was born yesterday. I miss her and I never got to know her. “Miriam” also means “longed-for child,” which seems more appropriate now because now I’m longing for her more than I did before. Now she’s truly longed for, and now she is just what Manny named her: a bitter gift, but a gift nonetheless.

I want another child as soon as the Lord allows–not to replace Miriam, but because now I have an inkling of how precious and beautiful a child is. Because I’m craving a child that will squirm and demand things and nurse at my breast. Because I want to see Manny be a father. Because Miriam didn’t demand enough, and I didn’t get to love her enough.

Just a military wife and boymom of three, finding simple ways to build an intentional life.